Here is my boarding pass for the next test flight.

If all goes well, I'm going to Mars.
Join me by getting your own boarding pass here: http://go.usa.gov/vcpz

OK! Only our names etched on the Orion space capsule payload will go, not us. Still, it might be fun to have your name etched on the Martian lander sitting on mars. Or the name of  your dad, mom, son or daughter!
The next flight is December 4th, 5th or 6th, however, the last day to register is OCTOBER 31st.


You only have 10 days left to register.

After each flight the names will be recovered and placed on the next flight. Eventually the final flight will be to mars.

Why isn't Alabama in the top five?

Alabama is in 22nd place, Can you believe that!

!!! TWENTY SECOND PLACE!!!
We have NASA in Huntville. We built most of the stuff that took us to the moon.Huntsville is in charge of many current NASA programs. I can see Texas and Florida being in the top three, but why isn't Alabama? We are behind Tennessee and Wisconsin for crying out loud!

If every Adult in Tallassee signed up, Alabama would move to 5th place. Sign up your kids and relatives, and we could be in the top three. Tell everybody in Elmore Co. and if only half of them helped us could be in first place.

Why We Should Do This!

If we can move Alabama up to the top 5 in just 10 days, we would turn some heads a NASA. Heck! I bet even the BBC would do a story about Tallassee.
Huntsville built most of that stuff up there in space. We built most of the equipment that took us to the moon. Dozens of our current deep space projects are run out of Alabama, yet, the mainstream media only ever mentions Texas or Florida when they cover NASA. We have many space industries here in Alabama. We should get more NASA contracts.

We have ten days!

Go sign up HERE:  http://go.usa.gov/vcpz
Be sure to send out some emails. POST IT ON FACEBOOK, TWITTER, G+ or your favorite social site.
Pass the word at school, work or church.
Call your Favorite radio station!
Include your boarding pass link on every Facebook post you do between now and the end of the month.

If all these reason't aren't enough, then think about how important your kids education is. Put their names on the list and follow the space program with them. They may surprise you with what they think about having their name in space.
Posted by Bob Grosh at 9:18 PM No comments:

Be a Social Walking Dead.

What happens to your Facebook and twitter accounts after you're gone.
You can be a Zombie on the net.

If I Die  (If I die, what happens to your Facebook account? - a Facebook app post a public message or video after you die you.)
LIVES ON  (When your heart stops beating, you'll keep tweeting)    (Your Social Afterlife on twitter)
Dead Social  (Saying "goodbye" to your friends on Facebook & Twitter)
Life Naut  ( Long-term storage of information for  cryonicists and other immortalists. -  Create a Mindfile and broadcast it into space.)
Report a Deceased Person | Facebook Help Center | Facebook  ( Friends can share memories on the memorialized Timeline.)
Posted by Bob Grosh at 5:16 AM 9 comments:

What do you do when your phone, tablet or laptop are lost or stolen?

Here is a completely unexpected demo of "Prey", a program you install on you mobile devices before they get lost. There is a short intro as Michael reads some "unfounded" police reports. Then I skip  to the fun part.

How to Recover a Lost or Stolen Laptop, Tablet or Phone

It is bad enough when someone gets their hands on all your photos and personal data, but when they have your device, it's even worse. What? you didn't make a backup?

If you do nothing else, at least prepare you device for the worst possible thing that can happen! It ends up in the hands of someone else!

Install "Prey" on your smart phone and portable devices.Do it before they go missing. It will not work if you don't install it before it is lost.

You should at least give yourself some chance of recovering it, but even better, disable it, post a reward message on it's screen, make it emit loud annoying alarm sounds, have it report it's current location, and send you a picture of the person who has it (assuming your device has a camera).

This will take less than ten minutes to set this up. Once installed it does not slow down your device or even show up on the device. In fact. it does NOTHING until after it is lost and you report the loss by marking it as missing.

The people at PreyProject.com did a great job with this app. Did you lose the receipt for your laptop? Fail to record the serial number? Forget the model number? The web site will get all that from the device, everything you need to file a police report. Once you mark your device as missing, and the person who has it turns it on, it will even take a screen capture and a photo every 10 minutes so you can see what they were doing and who did it.

Three steps to securing your stuff.

STEP 1
On your home computer, go to preyproject.com and set up an account.
Make a paper note of the email account and password. Use the same email and password on the devices when you set then up in the next step. 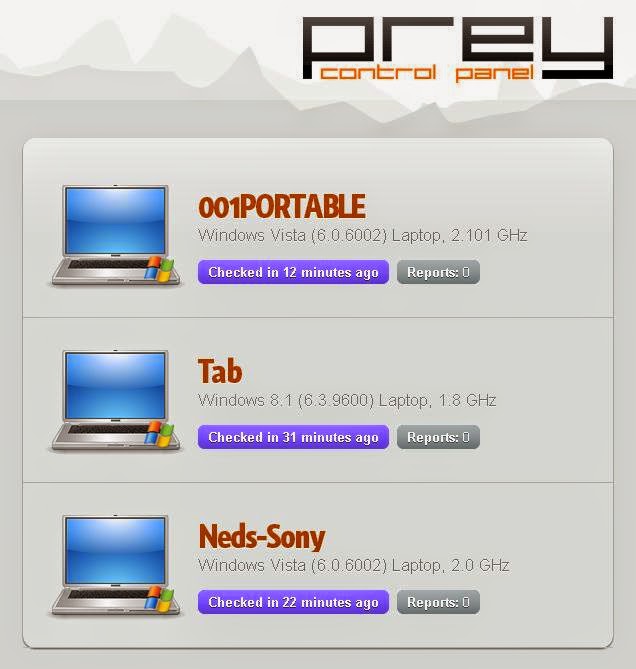 
You are done setting up your devices. 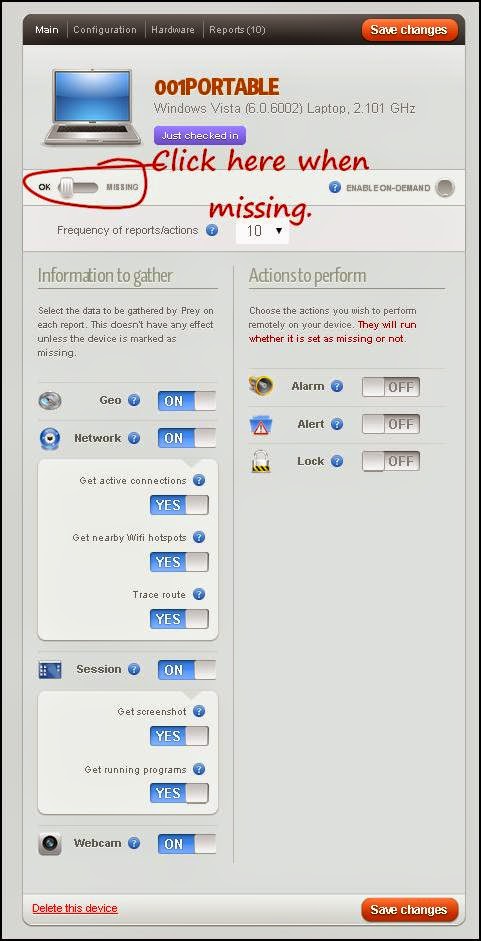 You should really play with this a little to get familiar with how it works and make sure you did the client installs correctly.

Now for the Cool Technology Stuff!

So, how does it locate your laptop?

Laptops, and some tablets don't have a GPS. So how does that work? You may remember a report I did about privacy a few weeks back. It seems that  someone "discovered" that Google was recording more than pictures with those Google earth cars. They were also recording WiFi signals. The uniformed masses were all in an uproar about Google "spying" on our WiFi home networks, possibly reading our email. (Never mind that those home networks were sending data, such as emails, out on the net, making it entirely unnecessary for Google to send a car out to your house.) What Google was really doing is recording the id's and relative signal strengths of all the WiFi signals. At any given point in the average neighborhood, as many as a dozen WiFi routers can be detected, your device normally only connects to one of them. By recording the signal strength every few feet while the Google Maps car drives through the neighborhood, the relative locations of all the WiFi routers can be mapped out. When someone turns on your missing device, it turns on the WiFi receiver and checks all the reachable WiFi signals and measures their strength. It does this even before it connects to one of them. When your device is marked as missing, the Prey app on your device simply sends the names and relative strength of all those signals to the Prey Project web site and they are checked against the Google map data. By triangulation and a little math, your missing device can be located to within a few feet is some areas. That's even more accurate than GPS.

Stay away from secure sites until you are sure they have been patched.

The following email services are patched and can be used.
Gmail.com
Hotmail.com,outlook.con etc at Microsoft
Yahoo.com
Twitter.com
Facebook.com (but not every Facebook app or game.

Primesouthbank.com is OK to use as the Heartbleed is blocked by the ISP
Go to the bank or use their web to check your account.
Do NOT use non bank owned ATM's to withdraw money of check your ballance.
Be aware that some ATM's at banks are NOT operated by the bank. Don't use them.
Before using any other site check it with the following tool:
http://filippo.io/Heartbleed/

Type in a site name like Twitter.com  then hit Go.
If it is red, do not use it
If it is green read the green message, It will tell if the site has been patched or simply had some functions turned off as a way of preventing the heartbleed.

Protect Yourself from the Apple ID Scam

Last month, Apple ID suffered a serious security breach which led to Apple urging its users to enable the two-step verification. The Verge, a tech and media news website, found a link and step-by-step tutorial on how to hijack an Apple ID. With just an email address and date of birth a hacker is able to reset your password. Huntsville Alabama helps discover water in our solar system. For the first time water is confirmed on another planet in our solar system. Alabama played an important part in the discovery. At NASA, project Dawn confirmed that plumes of water are being ejected from the dwarf planet Ceres. Ceres orbits our sun between mars and Jupiter. It is the closest of the three dwarf planets in our solar system. Project Dawn is part of NASA's Discovery Program, managed by the Marshall Space Flight Center in Huntsville, Ala. An artist's conception shows water vapor being released from two spots on Ceres Next year, NASA's Dawn spacecraft is due to go into orbit around Ceres. The discovery leads to the possibility that microbial live might be found on Ceres, adding it to mars and Europa. as possible locations
Posted by Bob Grosh at 9:32 AM No comments: