Thunder Rider Comic book Progress update
.
Building S84 was the Operations Building at Hickam field on Ford Island, Pearl Harbor. There is only one photo taken from miles away in black and white. Its poor quality does not show much, but it is obviously under construction and missing some features. I had to base my drawing mostly on written records.

Here are a couple pages that are about half done. The inside cover and first inside page are a spread.
The first page is usually called the splash page. It is supposed to set the stage for the comic and introduce characters.

Our hero, Captain Chuck. Is not on the splash page. 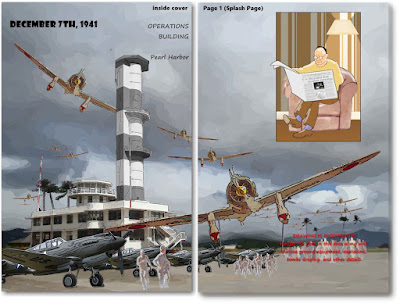 Instead, I thought I'd show Chucks Dad reading about the Perl Harbor Attack while talking to Chuck in the next room (and on the next page). I still have to add text, bombs dropping, and explosions. The fleeing soldiers are just sketched in and need a lot of work to give the scene energy and action.