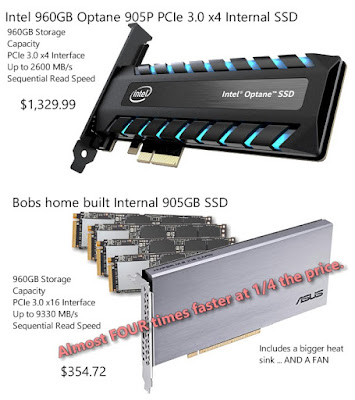 As a geek, I like speed. But, I'm a cheep geek. Spending a grand for a hard drive is fatuous. Especially when I can build one that is four times faster, for one fourth the price.

While You can buy enterprise grade PCIe disk drives, they are pricey. An Intel 1 TB PCIE SSD drive  is over a thousand bucks.

Some cautions here. In order to work your motherboard and processor chip must supply 16 lanes of data to the PCIe slot where you plug in the Hyper card. Most won't. You must use a Intel processor that has 44 lanes, not 16 or 28. The CPU chip must also support VROC, (Virtual Raid on CPU). VROC is a hardware RAID controller built into some i7 and i9 Intel CPUs. I used a i9-9720 chip and an ASUS Prime Delux II motherboard. The drives I used are the Intel 9720p 256GB and the ASUS Hyper M.2 X16 Card.

The Bios on the Asus motherboard will load a VROC extension and allow you to create a RAID-0 of the four individual Intel M.2 drives. When you install Windows 10 you can load a driver from Intel for the combined drives during the Windows 10 installation. The four M.2 drives will then show up as a single drive when you boot Windows. The drive will be drive C: so EVERYTHING will be fast. 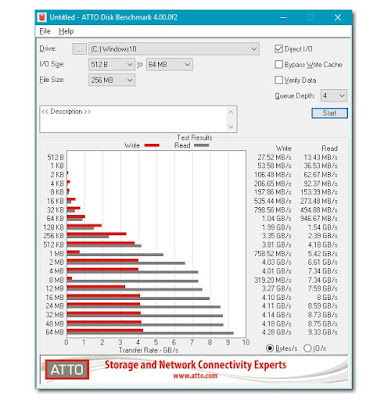